musiclife217 wrote:
I can't seem to find the Leduc Sextet arrangement... could you share it if you have it? One thing leads to another! Thanks !


Thank you as always! This is such a nice one... my research also revealed that there is one by Bohm floating around, too... ♫
Top

Probably would be just as 'at home' in the "Operetta" thread, if so, I may just hyperlink to this from that one if necessary for accuracy.

Andre Messager
Messager at the piano.JPG
is one of those examples of a musical talent that appears without warning in a non-musical setting. Although his family was affluent (the father prospered as a revenue collector), they did not play music. But they gave him the standard education that included playing piano, and he showed immediate ability and deep interest in it. In 1869, he entered the Neidermeyer music school. His teachers were Fauré and Saint-Saëns, who remained his close friends and supporters. In 1874, he succeeded Fauré as assistant organist at St. Sulpice to Charles-Marie Widor.

In 1876, Messager finished a symphony that won first prize in a competition organized by the French composers' rights organization and was premiered by the Concerts Colonne in 1878. He entered a cantata called Promethée the next year, winning second prize. He began conducting at the Folies-Bergère, where he also wrote some ballets. In order to have more time for these activities, he took a less prestigious and less demanding steady job as organist of the church of St. Paul-St. Louis in 1881. Even so, he accepted an offer in 1882 to become choirmaster of Ste. Marie des Batignolles.

In 1883, he married Edith Clouette (Fauré played organ at the ceremony). The same year, he received a major opportunity: Firmin Bernicat had left an unfinished operetta, François-les-Bas-Bleus. The publisher Enoch commissioned Messager to complete it. The music was charming and a success, giving Messager the opportunity to compose operettas of his own.

He was among the first French musicians to attend the summer Wagner Festival in Bayreuth, a trip that virtually became a pilgrimage for a generation of French musicians. He and Fauré gently satirized this trend (which had immediate stylistic effects in French music) in their jointly composed quadrille for piano duet, Souvenirs de Bayreuth.

Messager became famous for his operettas and other light music; in 1886 he wrote one of his most enduring pieces, the score for the ballet Les deux pigeons. One of his greatest successes was an opera named Madame Chrysanthemum (1893), based on a story by Pierre Loti which was also the basis of Puccini's Madame Butterfly. He became one of the few composers to co-write an opera with his wife; he had divorced his first wife and in 1895 married Dottie Davis, an Irish composer who used the pen name Hope Temple. This opera was only a mild success. The marriage had its share of troubles; the Scots soprano Mary Garden said that he was persistent in wooing her as she was preparing to create the role of Mélisande in Debussy's opera Pélleas et Mélisande, which was premiered under Messager's baton in 1902.

He was also in great demand as a conductor, both in light music and the operas of Wagner and Mozart in particular. And yet another talent manifested itself when he became a successful administrator. At different times, he headed the Opéra-Comique, the Grand Opera Syndicate at Covent Garden, and the Opéra de Paris. Although this curtailed time available for composition, he continued to write popular stage works. He showed a great deal of adaptability of style during his career. He produced hit operas, operettas, and songs in the late-Romantic style, and in the 1920s, successfully wrote popular songs in the latest chanson/cabaret style. He continued to achieve success into the 1920s and in 1927 was appointed a Commander of the Legion d'honneur. Many of his songs, some of his operettas, and Deux pigeons remain viable and popular, although his serious operas are rarely if ever encountered.

Ketèlbey, Albert W(illiam)
Ketelbey in his garden.jpg
(b Birmingham, 9 Aug 1875; d Cowes, 26 Nov 1959). English composer and conductor. He showed musical promise from an early age and went to Trinity College, London, when he was 13. He became a professional pianist, at 16 was organist of St John, Wimbledon, and was also apparently proficient on the cello, clarinet, oboe and french horn. In his early twenties he toured as a musical director of a light opera company, and at 22 became the musical director at the Vaudeville Theatre; composition and, later, recording for Columbia remained his main professional interests. His student compositions at Trinity College and for some time afterwards (a piano and wind quintet, a string quartet and the Concertstück for piano and orchestra) were probably in a classical vein. His first major light music success was The Phantom Melody, for cello and piano, which won a prize in 1912 offered by the cellist August van Biene for a piece to complement his own popular Broken Melody. Three years later Ketèlbey published In a Monastery Garden, originally for piano, and which was followed by other topographical mood pictures and genre pieces which were ideal for the accompaniment of silent films. He also wrote specifically for silent film with such titles as Dramatic Agitato and Mysterious, and his greatest success came in the heyday of the form (1915–29). He continued to publish more serious works often under the name of Anton Vodorinski, usually for solo piano and often with a Russian flavour. Other pseudonyms he adopted were Raoul Clifford, A. William Aston, Geoffrey Kaye, André de Basque and Dennis Charlton. He conducted his own music widely, but latterly hardly left the Isle of Wight.

His gifts for melody and sensitive, colourful scoring ensured continuing popularity with light orchestras and bands until after 1945. The most popular of his hundreds of pieces emphasize emotionalism and sometimes exaggerated effects at the expense of structure and harmonic subtlety.

Bibliography
P. L. Scowcroft: British Light Music: a Personal Gallery of Twentieth-Century Composers (London, 1997), 59–62
J. Sant: Albert Ketèlby 1875–1959 from the Sanctuary of his Heart (Sutton Coldfield, 2000)
You do not have the required permissions to view the files attached to this post.
Top

was not sure if should be here as it is solo piano or if under "Operetta" since that is was the work originally is:
Gilbert and Sullivan's Iolanthe transcribed for solo piano by Tours
viewtopic.php?f=19&t=239&p=23676&hilit=operettas#p23676
Top

You do not have the required permissions to view the files attached to this post.
Top

I have been looking, so far in vain, for a fantasy on themes from Cosi Fan Tutte...there is none? Too sad, with so many wonders in this opera...

...or am I missing something?

Pianovirus, I share your enthusiasm for this great work!
There doesn't seem to be anything much by way of fantasies,
but there is this link to Greg Anderson, two of whose
compositions are apparently based on themes from it:-
http://en.wikipedia.org/wiki/Greg_Ander ... pianist%29
Also, IMSLP has my scan of the 2H Metzdorff arrangement,
which is nice to play through.
Top

And also thanks a lot for your work in sharing the Metzdorf arrangement!! I love these arrangements for getting to know works better. So far among Mozart operas I only played from this kind of arrangements from the Figaro -- but now I see this was also a Metzdorff arrangement uploaded by you. Much appreciated! The Greg Anderson works are for two pianos and one piano four hands, respectively. In other words, there is still a huge possibility for today's arrangers to create an immortal operatic fantasy!!

Btw, if you are also enthusiastiac about this work, you probably already know this recording...otherwise please get yourself a copy and watch it. It's my very favorite opera DVD. 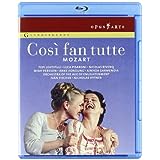 Dear Pianovirus,
Thanks for the DVD recommendation. Cosi is also well worth seeing
performed live. Please note that I've uploaded scans of all 7 of WAM's
most famous operas to IMSLP, arranged for piano solo. Unfortunately
the pdf quality isn't great, since the master copies were somewhat poor
photocopies. But who cares? It's the music itself that really matters.
Regards, Tim.
Top

Does anyone have a transcription or score for this incredibly beautiful Waltz from Korngold's Die Stumme Serenade?
http://www.youtube.com/watch?v=NXDuBKvQ8-U
Top
Post Reply
36 posts