Does anyone have Alexandre Goria's etude 'Le Trille', Op. 72 I think?

happy to finally meet this request and move closer to completing Goria's Op. 72.

Thanks so much for this musiclife217 (and also to you Jim)! Great to see this has been unearthed. Good to know about the other pieces too.

Also very pleased to see some Billet here. Seems to have been one of the many touring virtuosi of the time. I think he spent time in Moscow and Geneva and was the only musician of the time that I can find who performed the elusive Sonate, Op.15 by its elusive author Antonin d'Argenton.

For those who read French, here is a bit more about Alexandre Billet :

From a musical gazette of 1845 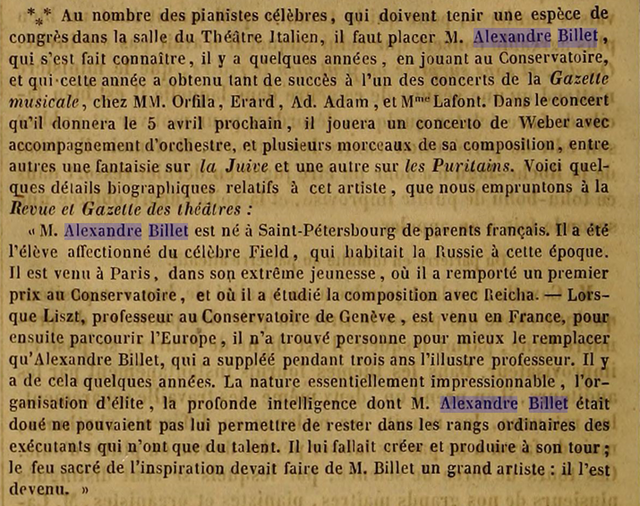 Thanks for this extra information Jean-Séb!
Top

I thought Mr Google might like to try translating the above French text. It's not great English!


M. Alexandre Billet was known to us by name only; he has long professed piano at Geneva, where Liszt had drawn him; he had been
living in Lyon for two years, and a few years ago he went to Russia, and the desire to perform in Paris finally led him to give a
great concert with an orchestra at the Theater-Italien. He plays the piano as master, and knows how to interpret the masters better.
Beethoven's concerto, this great work of which the adagio is at the level of what the author has written more delicious and more
beautiful; Weber's concerto, an admirable composition of variety, grace, and verve, has successively brought to light M. Billet's
high musical qualities and his clever mechanics; he does not seek to substitute his own feeling for that of the author; he is
content to understand thoroughly the thought of which he has interpreted himself and to reproduce it alive and intact. He does not
take hold of the composer's force, but he gives himself to him, fingers and soul. His own music, by the way, is well done; many of
his studies have been applauded, and this concert obviously gives M. Billet a high place among the great talents of the time, a
place which he has worthily conquered and which he will be able to preserve.


Alexandre-Philippe Billet (St. Petersburg, March 4, 1817 - Geneva?), Pianist and composer. He studied at the Conservatoire de Paris,
where he obtained a 2nd piano prize in 1835. In June 1836, he moved to Geneva, where he taught piano at the Conservatoire, from
March 16, 1836 to July 16, 1839, while composing music. works for his instrument. In 1841 he visited Italy and published some of
Ricordi's compositions. On March 31, 1842, he participated in the concert in Lyon of Sigismond Thalberg, with whom he played two
pianos a large duo of Thalberg on the grounds of Norma. He taught practical harmony at the Geneva Conservatory from September 1,
1859 to February 1, 1864. Between his two appointments at the Geneva Conservatory from 1848 to 1858, Alexandre Billet settled in
London, where he gave many concerts which were very accrued. He gave in 1850 and 1851 a series of three concerts and from 1852 a
series of six concerts of classical music for the piano, programming major works of neglected composers such as Handel, Dussek and
Clémenti. It was he who played for the first time in England the sonata for piano op. 106 Beethoven's "Hammerklavier" at London's
St. Martin's Hall, May 24, 1850, and Chopin's Sonata in B flat minor in 1852.
Top

this composer does have an IMSLP page, but I do not see this number!

Something to add to the Tarantella collection, perhaps...

Lebierre, Olivier - Op. 62 - Tarantella
You do not have the required permissions to view the files attached to this post.
Top

Nice find. Here are musiclife217's JPGs converted to PDF with minor cleanup.
Lebierre_Tarantella, Op.62.pdf
You do not have the required permissions to view the files attached to this post.
Top

Thanks to both of you.
Top

Thank you, all, enjoy!
Top

Does anyone have and could share the Ravel Piece de Forme Habanera for solo piano?